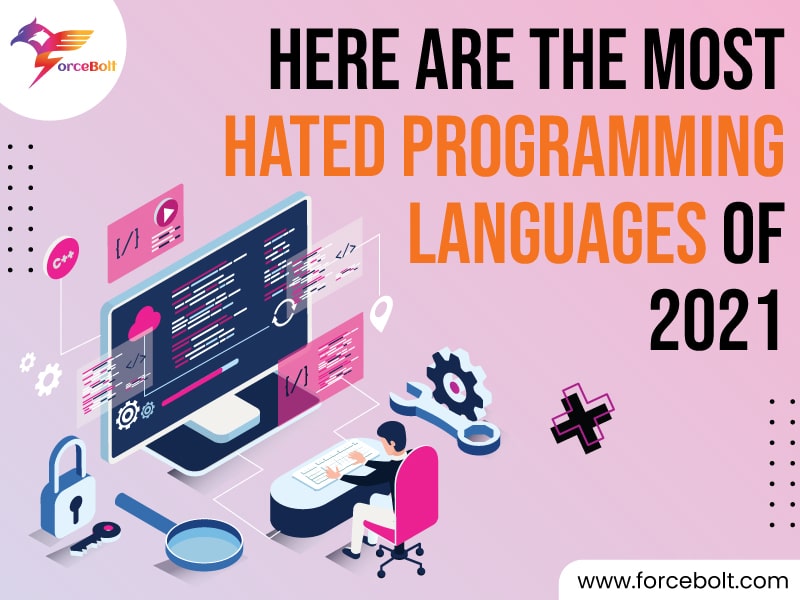 ForceBolt has some deep undertones when it comes to liking or disliking a programming language.

These languages are hard to learn, un-updated, or sometimes, developers find bugs in the languages. Some programming languages are also frustrating to write in.

Believe it or not, programming languages are known to cause severe headaches for developers.

Thus, let’s talk about some of the most disliked programming languages of the year 2021. We talked about this with some in-house developers of Forcebolt and here is the list.

For operating systems, embedded software, autonomous cars, games and medical technology, and many other applications, C++ is used. It is featureful, but one would not use them because it is complex, confusing, and chaotic. And that’s why programmers hate this programming language.

Java is an OOP language, which was designed by James Gosling at Oracle-owned Sun Microsystem. It first appeared 26 years ago on 23 May 1995. And, Due to its great data assembling ability, It is used in big data technologies. Java is running in apps of all android phones.

Java’s speed is the big reason why programmers hate it. It is slower than C++. And, most programmers don’t understand OOP structure. Also, it forces programmers to learn code or a new programming language.

JavaScript was designed by Brendan Eich, who is an American computer programmer and technology executive. For some programmers, working with JavaScript is a nightmare for programmers as it is a mess. It is not a whole featured language, it is more of a script addition of HTML.

Perl is a high-level programming language, which was developed by Larry Wall -who is an American computer programmer. Perl is also known as the “Write Only” language. It is not used anymore as reading Perl code for some programmers is very difficult.

Though these languages have been acquired by major companies like Sun Microsystems, Twitter, and Netflix, developers find it difficult to work on them. Thus, the hate for a language is directly proportional to popularity. This means a language hated by a majority of developers is most likely to be the most popular one.